WHAT THE FLYING FUCK DO YOU MEAN "LAST ARC"?!

No, I'll talk about the chapter in a moment since it was actually pretty awesome and gave me an actual shock, but let's focus on the recent reveal that this is supposedly the final arc of Fairy Tail. Apparently, there is an official website for the upcoming Fairy Tail movie "Dragon Cry", that is to celebrate the series' 10th anniversary. And on this website, they say that the manga is in it's final arc. I WANTED E.N.D, NOT END!

The Truth About Saitama Fighting Anyone

Since the anime adaptation of "One Punch Man" was released in 2015, the fandom community has essentially been on fire due to their burning passion for the gag-like shonen series about a bald man who is so powerful he can defeat all his enemies with one single punch. Thanks to the stellar animation by Madhouse, the amazing soundtrack that fits perfectly with the crazy action scenes, and the comedic monotone of the protagonist Saitama, the anime was a hit and One Punch Man has enjoyed plenty of success even to this day two years later.
Read more »
2 comments:

Yes, Mashima gave us two chapters in one week. And yes, it was a mixed bag. And yes, I am here to review them. We got twice the amount of chapters to get through, so let's not waste time and get started. It would be mighty.... ice.... of me to do so!

Not the fight we needed, but the one we deserved.

Finally, I can be more positive for once... This war arc really does feel like it has been going on for a while now, but the end is clearly getting closer as we wrap up almost all the encounters with the Spriggan 12 and move to focus on the remaining foes, although I have my doubts if August is really the only one left to be a factor in this arc.

That's actually going to be a running theme this week, as I attempt to actually figure out exactly what happened, why it happened and what will happen next. It's a confusing chapter this week, but you're here reading it so you expect me to make some sort of sense with this nonsense, don't you? Sigh... Fuck it, here goes!

No, Yuri on Ice is Not Fujoshi Bait, You Walnut.

Gather around, kids. We have a new fish to fry.

It started on Crunchyroll.

Actually, it probably started before Crunchyroll annual anime awards, but the awards are a good checkpoint. Yuri!!! on Ice! won every category it was nominated for, and naturally some folks got a little bitter and ranted about their anime being sidelined by YOI. That’s fine. That’s normal. I not got a problem with that.

What I do have a problem with, though, is spewing bullshit.

Such as the ill-informed opinion that Yuri on Ice is fujoshi bait. And the only reason YOI became so popular is solely for this reason.

[Note: this is a follow-up to Otaku Nuts' Top 10 LGBT Characters article - don't forget to give the original some sugar]

Gay and lesbian people! Bisexual people! Transgender people! Intersex people! Maybe you've been hearing a lot about the great diversity of human experience lately and you're interested in hearing a little more. Or maybe you aren't. Maybe you're just here for the Yuri!!! on Ice fan-gushing. 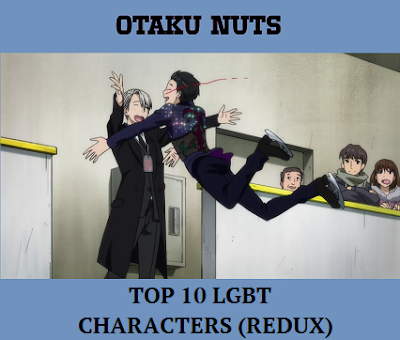